Hi all! I am so sorry that I have not kept up with writing at least a little something sooner…just a lot going on lately.  My husband had a heart attack about a week back and it just has been so crazy around here.  Thankfully, my daughter who goes to college about 45 minutes away, had decided to come home early that day. If she had not been there for him when this happened (I had gone out food shopping) he probably would not be here right now.  And, if he had not gone into the hospital when he did, they would never had known about another blockage (about 70%) that would have been fatal.

He had two blockages, one on the right side (100%) which gave him the attack, and the one on the left. They took care of both and has 2 stents in both arteries now.  He only has 5% damage to his heart, which they say can be corrected with diet and exercise. He can be off the meds if he does this for a year. I am very thankful and keep telling him and everyone else that he has been given a second chance, and we will go forward and treat it as such. Very, very lucky and I truly believe prayers were answered here.

But anyway, I am trying my best to get back on track, and I am almost finished with my Wix website that I want to put up NOW, but it just needs a few finishing touches, a few more art downloads and then it can go public.  I will definitely share the news here first when it goes up.  Hopefully by the end of this week! I am also trying to finish some more art pieces that I can share with you that are being worked on.  I will try to do this in the next few days. But for now, I will say thank you for your patience and I will try to get something new up here asap.  Here’s my thank you to you!  Take care! Cheryl

Again, my love for angels made me try another one, and of course, I am running out of titles as I love to place them in the garden many times.  I could actually have “Angel In The Garden” several times now,but until I can find another name for this, here is another angel in the garden :).  I am also not sure if I am finished with this yet, but I think I may be.  Just wanted to get this out there. Hope you like it.

I had posted this once before, but am doing so again. I had almost forgotten I had even done the picture. It was done several years ago.

Do you remember this song?  Once you hear this song, you never quite forget it.  The words stay with you.  They did for me.

I had to illustrate what the song was saying to me.

A little girl dancing down the road to her future,  not knowing all that lies before her, but dancing anyway. 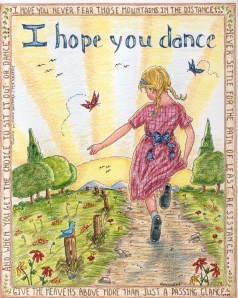 I Hope You Dance

The inspiration for this picture (which I did awhile ago) came from a model in a magazine.  I loved her pose and it made me feel like she hadn’t a care in the world.  I just gave her a bright dress, surrounded her in nature and used a quote that says it all.  Just enjoy each day the best that you can.  Oh yes, and stop and smell the flowers too!  Hope you like this one.  🙂

Delight In The Day

Here is a quote that I illustrated awhile back.  I really liked the quote, but wasn’t sure how I was going to illustrate it.  I finally decided drawing several children tumbling about and climbing trees and such.  After all, that’s what being a kid is all about.

I think in the end it served the quote rather well.  And the quote rings true, for whenever I see children at play and being so free, it always makes me smile…and also remember.  Enjoy! 🙂 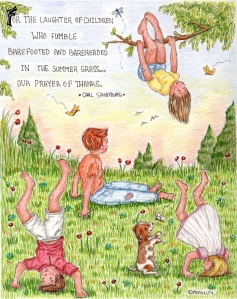 For The Laughter of Children

Okay, this may seem a little unusual.  In the ’70’s, I came up with a series of characters called Ped-Heds.  I came up with the character while doodling in my high school class one day (go figure).  I came up with this goofy looking character that had just a head and a foot and made them into greeting cards, to hopefully sell to a greeting card company (as always).  I had the series sent in for copyright protection (officially) and then started sending them out to various card companies.  As I drew them more and more, they became what you see today.  They became cuter and had funny sayings, and it seemed perfect for it’s time.  Then one day, I received a contract in the mail from a large New York Company that dealt with alot of work overseas, as well as here in the U.S.  They were very interested, but the contract was not drawn up very well.  It looked a little shabby.  So I took this contract to a lawyer I knew, and had him review it just to be safe.

Needless to say I was very excited.  Dreams of me finally reaching my goal in life and doing what I loved and getting paid for it, was unbelievable.  I couldn’t wait to sign on the dotted line, but wait…..

The lawyer made recommendations to the contract and things had to be reworded on the contract, or I would not be protected.  They could take everything and I would not get a penny if I signed it as is.  I was crushed.

The Lawyer sent the recommendations to the company and we waited.  They came back by saying the contract was fine the way it was and that there were too many recommendations. I called them hoping beyond hope this could still work.  This was all a mistake.  But no…

On the phone they told me they thought it over and that they couldn’t do, or wasn’t interested in, the idea any longer, and that was that.  Dreams dashed…again. 😦

I was miserable for a long while, but I had to think that if I had signed that contract, it could have been worse.  I tried after that to send them to other companies, but got rejected or was told they looked deformed.

Many years later, I was talking to someone about this whole episode in my life, and this person told me they thought they remembered seeing or hearing of Ped-Heds, but it was not “me” they saw on an interview, or where ever they heard about this.  It was someone else.  I was furious!

This was before computers were so popular and I never checked it out, but looked everywhere in shops to see if I saw them anywhere.  I never did.

I google the word “Ped-Hed” now and don’t see anything.  But will anyone out there let me know if you do… and also tell me what you think of this character.  I tried putting arms and legs to the character, but I don’t know if it does it any justice.  Then I’ll have to change the name!!!

Anyway, world…this is a “Ped-Hed”©, and even though I am no longer Cheryl Riley, I am now Cheryl McNulty and I am the creator!!!! 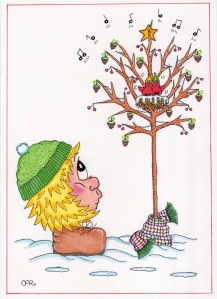 "Have Yourself A Merry Little Christmas" Ped-Hed 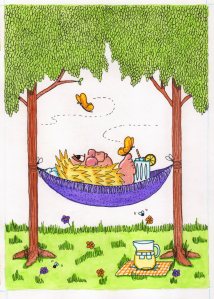 "I was just lying here thinking of you." Ped-Hed 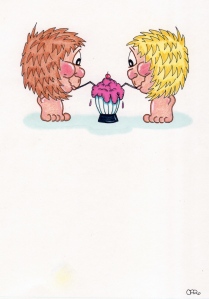 "Friends are for sharing the best of times!"

Hello!  This is an illustration I did  awhile ago.  I really like the quote and I love the look of needle point throughout the picture.  I also believe the quote to be true.  Alas, you don’t really see a lot of children sewing nowadays, let alone sewing a sampler.   But it’s really nice to think about.   Ahhh, the good ol’ days! 🙂

A Day Hemmed In Prayer

Do you remember this song?  Once you hear this song, you never quite forget it.  The words stay with you.  They did for me.

I had to illustrate what the song was saying to me.

A little girl dancing down the road to her future,  not knowing all that lies before her, but dancing anyway.

Sorry about the blurriness in the pic.  I somehow can’t find the original.  I came across a refrigerator magnet I had  made with the picture, which was not only small, but also laminated.  Hope you can still see it ok.

I Hope You Dance

Here is  an illustration that is still in sketch form at the moment.  I have been holding on to this for awhile because I am not sure if this is how I want to illustrate this quote from the bible.  This is how I picture it in my mind.  I figured it would just be kind of neat to show you how a picture starts out in sketch form, and then maybe you can compare it with the finished piece when I am done.

“Be not forgetful to entertain strangers: For thereby some have entertained angels unawares.”

This is a quote I live by as I am usually in the kitchen and I like it that way.  I feel most comfortable, and less stressed out, when baking or cooking up a meal.  When company comes over, I try my best to make them feel at home. Hopefully, I succeed.

In my kitchen, I have country aprons (from Amish country, of course) hanging off hooks, wooden plaques with clever kitchen quotes,  various country linens and other assorted country decor scattered throughout the room.  To me, it feels very “homey “. It’s me.

I like nothing more than when someone(usually my kid’s friends) walks through my door, and I have  something baking.  The compliments come quickly and before you know it, shoes come off by the fridge, and there’s conversation  and laughter.   Now that’s comfort!  I think that’s pretty neat.

I want my kids to remember kitchen smells.  You know, like a roast or banana bread, or even meatloaf.  I remember them, and fondly, too!

When my kids were small, we had a day put aside for just baking together.  I wanted them to get the satisfaction of starting with basic ingredients, and know that with a little hard work, you’d end up with this wonderful pie or cake or muffin-whatever.   As long as they knew it didn’t just come from a box at Stop and Shop.  We had great fun doing it, too!

It’s too easy today to just go and “buy” a box of cookies, a loaf of bread or even a birthday cake.  I know it’s necessary sometimes, but I think we miss out on so much when we do this.  All the senses are at work when you bake something yourself and when it’s done, “you” get the compliments. It’s much more satisfying.  Especially when you see their faces stuffed and something muffled comes out like, “Wow, this is really good, Mrs.

The Kitchen Is The Heart Of The Home

So, this is the reason for me illustrating this quote- oh, and look-it’s a little girl “baking”!  How surprising!!!!  🙂  Enjoy!  Cheryl

Where Artwork and Inspiration Come Together